In response to The Daily Post’s writing prompt: – A Moment in Time

What was the last picture I took and why? 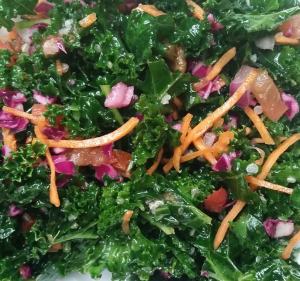 I normally don’t take pictures of my food and, of course, this prompt comes up.

This is a picture of the All Hail Kale salad from Veggie Grill which just opened up in Pasadena.  I took a picture of it so that I can see the other ingredients and attempt to make this salad at home.  It has tomatoes, red cabbage, diced onions, shredded carrots, corn and quinoa.

The dressing itself was pretty oily so I would make a a healthier dressing with little or no oil.

So while researching similar recipes, I found a healthier version already done:  http://detoxinista.com/2013/01/all-hail-kale-salad-copycat-recipe/

The original recipe which is listed in the link above calls for 3 cups of canola oil – yuk.   I’m so glad that I saw what was in the original recipe since there was more oil used than I thought.   This salad is good but it’s not as healthy as it looks.

Like Loading...
This entry was posted in Uncategorized and tagged all hail kale, blogging101. Bookmark the permalink.